You can now shop online and pay by credit card! 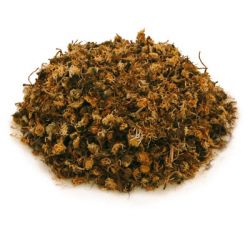 Bellis perennis, or the common daisy, is also known as the true daisy, dawn daisy, or English daisy.

It has a long history of medicinal use.

It is native to western, central and northern Europe. In North America, it is considered a weed because of its invasive growth. The flower heads, surrounded by white or pink-tipped petals open at dawn; they close at dusk and in dull weather, giving rise to the name ‘day’s eye.’

The ‘Generall Historie of Plantes,’ 1597, recommends a mixture of unsalted butter and daisy flowers as a remedy for joint pain.

Through the ages, herbalists have used it to treat ailments such as wounds, rheumatism, bronchitis, and kidney problems.

Steeped in folklore, the daisy has been used in many spells and has come to represent springtime, childhood and innocence. In old superstitions, a daisy chain around the neck was supposed to protect a child from being stolen by faeries.

The herb is being studied as a treatment of the Human Immunodeficiency Virus (HIV).

You can eat the fresh flower heads in salads, but daisy is more commonly used in herbal decoctions and ointments. It is known to heal wounds and soothe skin.

Mabinogion, the book of stories based on Welsh mythology and folk tales, mentions a bathing ritual using wild flowers. This inspired us to add daisy flowers to our Ceridwyn's Cauldron luxury bath melt.

According to Mabinogion, the water should have elder leaves, or cowslip flowers, and a few scabious flowers mixed in. Unfortunately, scabious flowers proved impossible to source, so we thought daisy flowers would be the next best thing.